Are mobile phones the new tobacco?

Could your calls be killing you? Is that lengthy natter actually boiling your brain?

The fact is, no one knows. And that is not good enough.

There should be an immediate scientific inquiry into the risks.

And manufacturers should be forced to do two things:

Sell their phones with anti-radiation "shields" fitted free - not as an extra, or

Give us free earpieces so we can hold the phones away from our heads.

It would cost them peanuts.

But it could save lives.

Our plea follows a terrifying claim from a scientist who says microwave radiation from mobiles is scrambling our brains.

We have uncovered a disturbing number of cases in which cancer victims have also been frequent mobile users. And there is mounting concern worldwide over the possible link.

So far companies have provided little information on radiation risks, despite a boom In sales. One In six Britons now owns a mobile. Thousands of parents are set to buy their children one for Christmas.

And leading makers Ericsson are even planning to hide tiny devices in cuddly toys such as teddy bears so tots as young as THREE can use them.

Yet all the time, the danger seems to be growing ...

Only lost week Virgin boss Richard Bronson advised staff not to clamp mobiles to their ears after his close friend Michael von Clemm died of a brain tumour.

The Sun wants all phones fitted with a simple shield, a cover which cuts radiation entering the head. At present they come as an extra costing up to £40.

We also believe free earpieces could be issued so users can hold mobiles away from their heads.

Scientists have warned that handsets can cause headaches, memory problems, ear and eye conditions - and cancer.

And biologist Roger Coghill, a radioactivity specialist who runs an Independent laboratory' in Wales, wants all mobiles to carry a cigarette-style Government health warning.

He believes the high frequency radio-like waves emitted by phones can limit white blood cells' ability to fight disease. It happens because the brain's fluid absorbs radiation when the phone is held to the ear.

This has the effect of deadening the signal. So the transmitter produces more radiation to compensate - increasing the damage - to cells and effectively "cooking" the brain, he claims.

Mr Coghill added: "People using mobiles for more than 20 minutes at a time are putting health at risk.

"After exposure to microwave radiation from handsets for three hours, only a third of white blood cells are still able to carry out their role of defending the body.

Ericsson are also developing a voice-activated range which children can wear around their necks an a cord.

A child only needs to say "mummy" and the credit card-sized device automatically rings the mother's number,

Yet the incidence of brain cancer is steadily rising - and many medics believe it is linked to increased use of mobiles.

In Britain there are now nearly 4,000 victims a year, of whom less than 20 per cent survive.

Meanwhile some mobile makers are launching "low radiation" phones which they claim will "protect users from injury to their health."

The Sun asks: If there is no problem with existing mobiles, why bother with "safer" ones? And we'd like some answers.

In America, 'tests with rats indicated short-term memory loss and DNA damage. The World Health Organisation has launched a probe.

Doctors discovered a malignant tumour when 32 year old cleaning firm boss Andrew Currall had a brain seizure in his sleep.

Andrew - who had had no inkling that anything was wrong until the attack - is convinced that years of using a mobile phone was to blame.

He said: "It's in exactly the same place on the right side of my head where I hold my mobile phone to my ear. I've had to have surgery and radiotherapy and hopefully I'm clear now. But I'm one of the lucky ones."

Recalling the night of the seizure, he said: "I felt like I was dreaming. My brain seemed to be fluttering. My girlfriend called an ambulance and I woke up in hospital. They found a shadow on my brain. They told me it was a tumour

"At first, we thought it was benign. It was awful when I was told it was cancer."

Andrew, from Peterborough, Cambs, has used a mobile for six years, often for hours on end.

He said: "I'll always believe that had something to do with it.

"My bills used to be huge. Now I still use the phone, but hardly at all."

Widow is set to sue

Now she is suing the mobile phone company she claims is responsible for the BT engineer's death.

He noticed a lump on his neck where he held the phone just months after he was first issued with one at work.

It grew as large as a grapefruit and doctors diagnosed an aggressive form of lymphatic cancer.

Delia, of Cherisey, Surrey, said: "From the start, he thought it was the phone. He spent a lot of time talking to head office with it in the crook of his neck as he checked junction boxes.

"There should be warnings like on cigarette packets, saying they can kill you.

Now friends - including Richard Branson - are convinced that they may have caused a brain tumour which eventually killed him.

Virgin boss Mr Branson said he "was one of the first to have a mobile phone and used It all the time.

"The particular type of tumour he had, and Its position was consistent with where the phone would be.

"I went to dinner with him just before he died and he said his surgeons were convinced that his extensive use of a mobile phone had caused the tumour.

Mr Branson - who is urging all his staff to use mobiles with earpieces - added: "These phones used hour after hour emitting waves cannot be safe."

IS THERE A LINK? 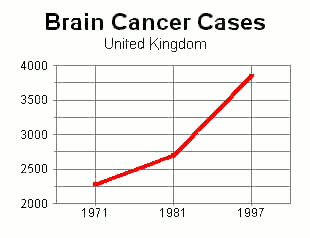 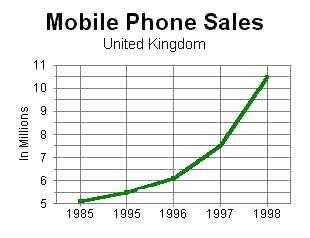 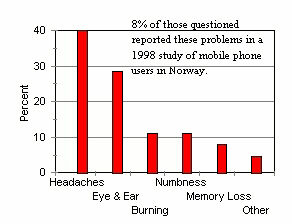